A Dry Basement Avoiding The Curse

Do you have a leaky or a dry basement? If it’s not dry you have a problem that needs some immediate attention as a homeowner. Getting your basement dry is another chore in itself though and is sometimes better left to the professionals.

The greatest nemesis that all basements face is dying an untimely death by water. There really is no point in even attempting to finish your basement if it suffers from water leaks or seepage or even a leaky basement window. If you try and avoid it by employing an “out of sight, out of mind” type of attitude, you’re simply delaying the damage by just covering up the problem. It’s still there, I promise you. You will ultimately find remorse in rotting floors and drywall, mold and mildew, and if you’re lucky that’ll be all it takes. For now, you should really take this opportunity, since you haven’t started that basement remodeling project just yet, to fix that water infiltration problems before you’ve gone and put up all the insulation and drywall and other stuff and get that dry basement that you need before the project starts. 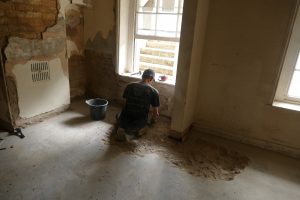 When you start to try and track down the source for your water woes, there’s a multitude of things that you’ll need to look at. But here’s the two that are really the main culprits to most all basement water problems that you’ll find almost 90% of the time. The first one stems from Mother Nature and all her refreshing and renewing rain that falls building up all the surface water and the second is simply poor drainage to disperse all that water that’s falling down. The simple solution to this problem is to just ensure that all the water drains away from the houses foundation. Typically, this is one solution that most anybody can do themselves, but in heavier problem areas where the ground actually slopes into the foundation, you might need to employ the services of a good landscaping crew to redo the slope using those big machines that’ll grade the land into a proper slope away from your foundation in no time.

But what if you are successful in ruling out surface water problems and drainage issues but you still have those problem areas that leak in your basement, you may have a ground water problem. Ground water is not actually water that is on the ground, it’s actually water that is below the ground. If you want to sound all scientific than you could call it subterranean, but essentialy means the same thing if you hear someone calling it this. Basically it’s nothing more than water that’s moving in the ground from high water pressure areas to low water pressure areas. If it’s determined that your basement leaks because of ground water you’ll have to find a way of diverting and redirecting that water through utilizing a sump pumps and pits and installing a basement drain tile, two essential ingredients for quality dry basement systems. If you have a newer home this actually may already be done as buiders started putting these types of systems in with new home construction sometimes upon owner requests simply because it’s easier to install this type of system when the home is being built and not after it’s already finished. 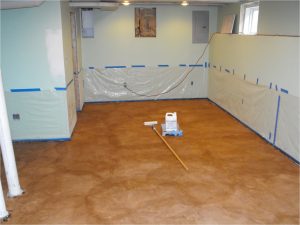 Here’s some good news for you though, even if your house doesn’t currently have these as part of it’s drainage plan, you can still install them in your home whether it’s new or old. Here’s some key points to remember for this whole dry system to work. The basement drain tile can be installed either outside the basement wall or inside the basement itself. This “tile” is nowadays more along the lines of a perforated pipe rather than an actual clay tile. The sump pump and pit, however, are typically installed inside. For this inside installation to work, you’re going to need to cut out the flooring around the entire perimeter of the basement. This perimeter cut will need to be anywhere from 1 to 1.5 feet from the existing basement wall. Then you’ll need to do some excavation work removing just enough dirt and debris to put in some gravel, the drain tile and ultimately the sump pit itself. Once done you’ll have to pour a new floor over everything that you just tore up. It’s pretty genius actually as the water that was seeping around and through the old foundation will now flow directly to the gravel and drain tile, the new lowest points you’ve just put in with the least amount of water pressure. These will now move that same water along to the sump pit where it will essentially get flushed away via the pump making your basement a much safer, drier place.

As you can probably tell from the explanation just above, this task can become quite back-breaking and laborious fairly quickly. Not only that, depending on the situation it could require some specialized tools and skill set to really knock it out right to get that dry basement. Because of this, it’s not something that’s really recommended to take on as a DIY type project. You’d be much better suited hiring something like this out to a qualified basement professional. If you can’t find any problems causing your current basement water woes from the surface or drainage issues and suspect that you might have a ground water problem instead, seek some help by consulting a specialist or engineer that could tell you for certain before you just decide that’s what it is.